In recent years, fiscal policy in Germany and the US has diverged. In response to the financial crisis both countries implemented large stimulus programs, but over time the policy priorities shifted: German finance ministers became obsessed with balancing the budget, while the Trump administration slashed taxes.

On both sides of the Atlantic, the biggest loser from these development has been investments in physical and human capital. In times of fiscal squeeze, investments are usually abandoned first. Its benefits only materialize in the long-term and the support-constituency is diffuse. Consequently, gross capital formation gross capital formation as a share of GDP has dramatically declined across advanced economies in the last five decades (Figure 1). The situation is particularly bad in Germany and the US. In both countries, there has been an “investment” gap for a long time, and despite some increases in investment in the last few years, the share of investment remains chronically low. 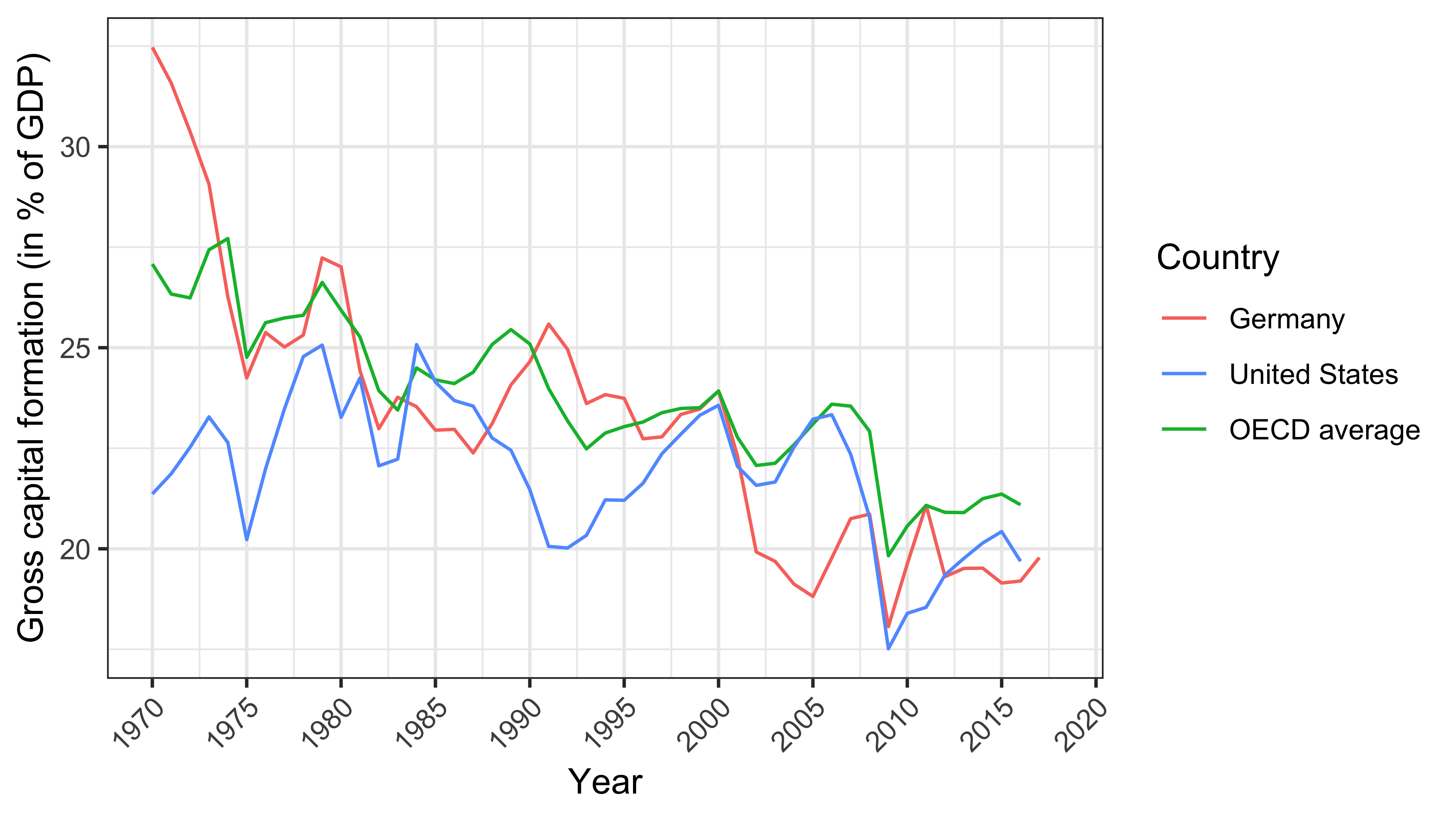 The results of this shortfall in public and private investment are already dramatic: bridges are collapsing, trains are not running, schools and universities are hemorrhaging, and swimming pools are closing. In the long-term, however, the consequences of this under-investment are possibly even more severe. The lack of investment contributes to low productivity, threatens economic competitiveness, and undermines the long-term prospects for economic growth. It also contributes to rising regional inequality and political turmoil, as regions that are left-behind fall back even further.

Policy-makers in Germany and the US should, therefore, shift their fiscal priorities: they need to develop large-scale investment programs that safeguard economic prosperity. This would not only help to revitalize regions that are left behind, but it would also help to expand the economic potential on both sides of the Atlantic. Unless policy-makers act fast, their countries will lose the physical and human capital to compete in the 21st century.

Policy-makers are in luck, though: there is no better time to develop a new “Marshall plan” than today. On the one hand, governments in advanced countries can finance debt very cheaply. Interest rates on government bonds remain extremely low (see Figure 2) and, as Olivier Blanchard recently pointed out, this allows governments to issue debt without large fiscal costs. This is particularly true for the Germany: yields on German government bonds have just turned negative, meaning that the government can issue debt of up to 10 years at negative interest rates. Private investors would essentially subsidize a public investment program in Germany.

On the other hand, a large investment program today could also be a much needed fiscal stimulus tomorrow. In the last few years, demand in advanced economies has mostly been supported by monetary policy, but amidst the slowing of a global economy, this is not enough. The balance sheets of central banks remain bloated, and as the chances of another recession are increasing, fiscal policy will have to pick up the slack. Yet, fiscal policy, and especially productivity-increasing investments, often have a time lag because it takes time to develop and implement them. Policy-makers would thus do well to start spending soon: today’s investments could be the stimulus of tomorrow.

In sum, the current macroeconomic environment presents policy-makers with a unique opportunity: as they implement economic policies that are good in the long-run, they can also reap benefits in the short-run. They would do well not to squander the opportunity.

This post was first published by the American Institute of Contemporary Germany Studies (AICGS) at Johns Hopkins University.